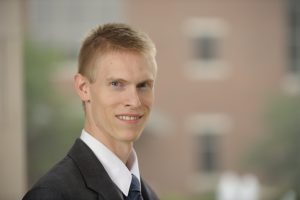 December 2015: The NURail Center has announced its 2015 Student of the Year. The winner is Alexander Lovett, a RailTEC graduate research assistant, who is working on a joint MBA-PhD. Alexander has been active in research with RailTEC since starting his MS program in Fall 2011 and has been supported by NURail since 2012. His research on better planning and scheduling railway track maintenance addresses a key concern as higher-speed passenger trains operate more frequently on the same track infrastructure as heavy-axe-load freight trains. He will be honored at the CUTC Awards Banquet in Washington, DC in January 2016. Congratulations, Alexander!