February 2019: During the deep arctic freeze in late January while people took extra measures to keep warm, railroads did the same. In an article written by David Graham of The Atlantic he discusses the effects of cold, wet weather on rails and switches. The title of the piece, “Frozen Train Tracks? Set ‘Em on Fire” was published on February 1, 2019 after videos of what appeared to be Chicago’s commuter tracks on fire. RailTEC’s Professor Chris Barkan was quoted in the article. Click here to read the piece. 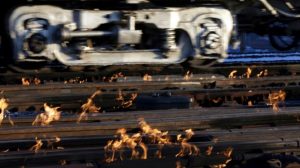